An aggressive 300-lumen mode illuminates distant side and forward hazards, all while spotlighting obstacles immediately in front of the wheel.  Blaze’s green laser projection of a bike icon gives vehicles and pedestrians advance warning – while the glowing flanks provide lateral visibility.  One telling example:  A tester astride a single-speed city bike stopped two jacked-up, 300-series trucks in their tracks with the light and flashing laser combo on a snowy suburban street. 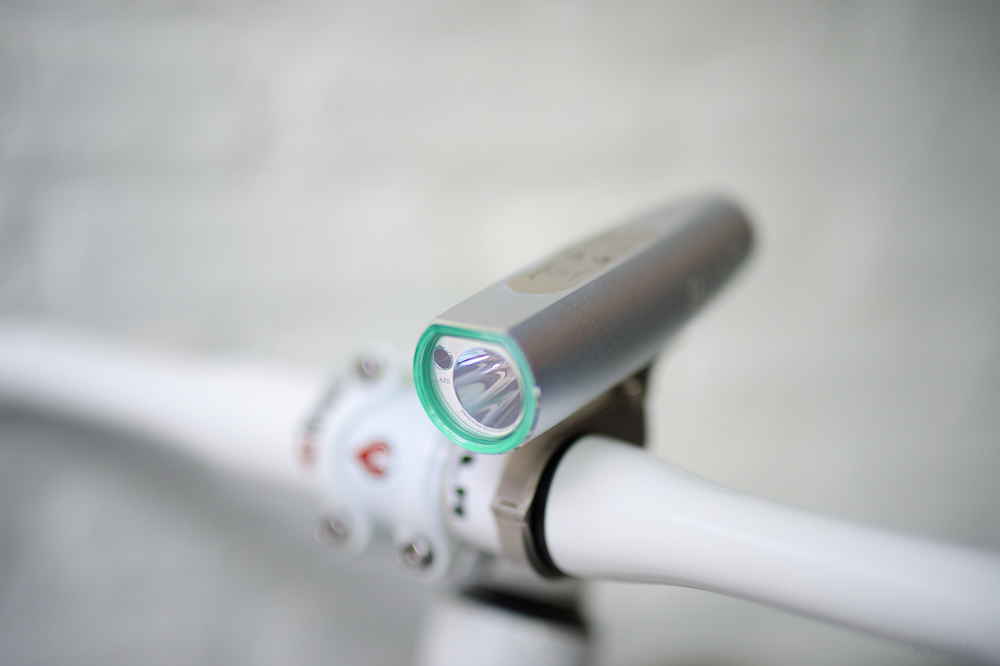 With battery lockout and laser deactivation when unclipped, Blaze doesn’t waste power and won’t blind your friends and coworkers. It’s worth noting that the unit does serve as a superior flashlight for after-dark bike maintenance and personal protection (the heavy, palm-sized Blaze aids self-defense when warranted).  Active Junky’s greatest challenge in riding potholed streets was to keep the light from pivoting horizontally on the handlebar. If you have smaller diameter bars, supplied bracket pads may need to be supplemented.

Much like a Mac charger, Blaze takes the high road with exterior magnetic charging contacts.  When Case the Labradoodle raced past the cord, the cable popped off instead of dragging the light from the shelf.  Straight-up USB connection or a wall adaptor get Blaze ready for action between dew-kissed commutes. Once in motion, mode switching was intuitive and crisp.

Without a doubt, Blaze commands a premium price.  Between an attention-commanding laser function, a beefy metal enclosure and the best clip-on mechanics we’ve seen in years, the light is a wake-up call. Have the courage to step away from underperforming options.  Nights of glory await – stay safer simply by being seen.  Now follow your gut and buy it.