That first pilgrimage to Alaska is a momentous expedition for any aspiring big mountain skier. Peter Wentz is a backcountry buff that’s no stranger to North American steeps. He grew up skiing Tahoe’s legendary Squaw before relocating to Whistler, BC. This spring, Peter finally made it up to Alaska – a destination he’d been dreaming of for years. We caught up with Peter after his trip to discuss fulfilling fantasies, how to prepare for your first trip to Alaska and what it’s like to stand on top of the line of your life. 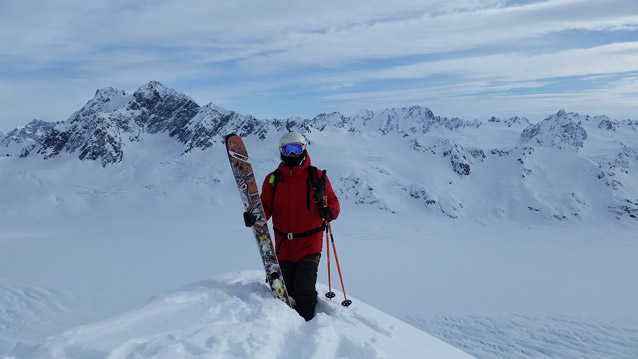 Favorite Terrain: Fun alpine zones, be it fast and open or a technical spine.

A celebrity (dead or alive) you’d want to ski with: If I had to choose one, it would be Shane McConkey. He was an awesome person and always having a good time on the hill. 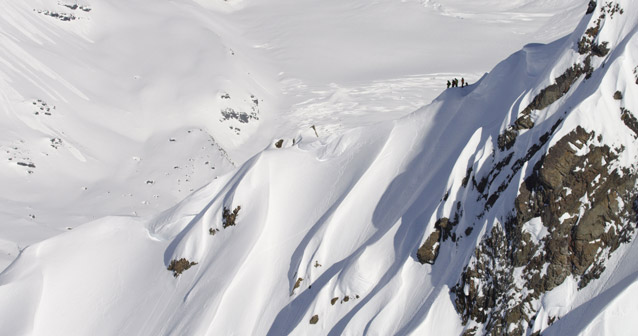 First off, give us a little background. How’d you first get into backcountry skiing?

My dad got me into skiing. When I was young we would do some short backcountry stuff in Tahoe, like Mt. Tallac or the hills behind Squaw. One summer, we went to South America to ski for two weeks and that’s when I realized that I just wanted to keep riding backcountry. 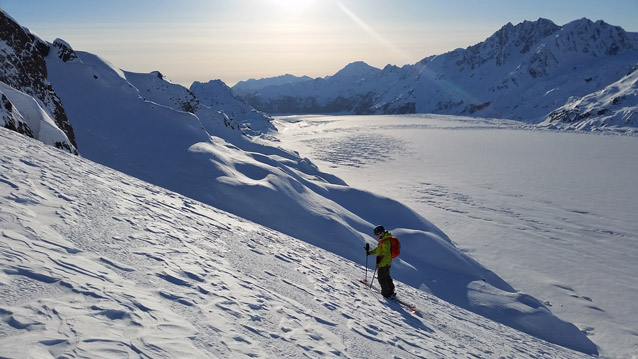 You’re no stranger to skinning and sledding. How have those pursuits prepared you for heli skiing in AK?

Skinning and sledding prepared me to look at lines.  Sledding in Whistler, you get to a zone after a lot of work, but then you have as long as you want to look at a line, feel out the snow and evaluate everything. Learning this evaluation process was the most important factor before coming to Alaska, because when we were heli-skiing we only had 30 seconds to a minute to look at the line and take a picture before being on top and getting prepared to ski it. 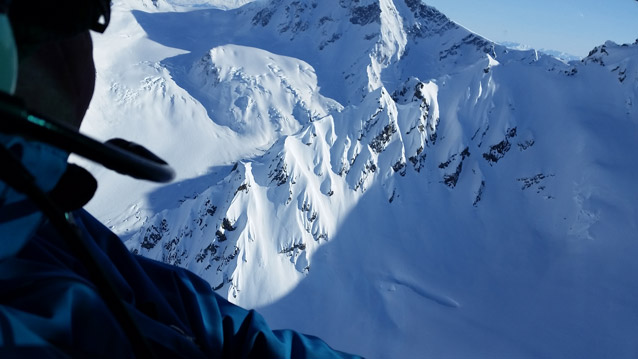 Expectations are a funny thing. Often, when we build something up in our head, it’s not as amazing as we thought it might be. What were your expectations? Did Alaska exceed those expectations?

I’ve wanted to come to AK since I was 14, when I watched my first ski movies from TGR and MSP. I just knew that it was the pinnacle, that one day I was going to get up there.

When we rolled up to Cordova there was no snow in town; one of the lowest snow years they’ve had in a while.  At the heli lodge clients were saying the snow was epic up high.  They’d just had a clear three-day window, and right as we got there that window shut down as the next storm rolled in.  Our first day looked like it was going to be the only day of the trip to fly. The next morning I was shaking in my boots, knowing that this is what I’d been waiting 7 years to do.

We get up in the heli and go to a warm-up zone.  Nothing gnarly, just getting our legs under us.  When we were flying into the mountains we could tell that the snow had heated up a bit, with roller balls, chunder, and wind affected snow.  We found the snow to be variable at best, but knew we had to give’r because it may be our only day.  From that run on we just kept getting into bigger and gnarlier stuff. In that one day, I was the most scared and most happy I’ve been in a long time.  There is really no way to describe it.  I learned so much about myself as a skier in one day, more than I have in the last year or two.

In the movies, you hear about how the terrain is steeper than anything you’ve skied before, how the snow is perfect, that you’ll get the best lines of your life.  This is true, but different. It’s hard to explain.  It is some of the craziest terrain you can ski, and they do depict it well in the movies, but until you get out there and experience it...

It was funny when I came back from Alaska and rode Whistler.  I looked around at all the biggest lines and thought, well this is all just AK mini golf. 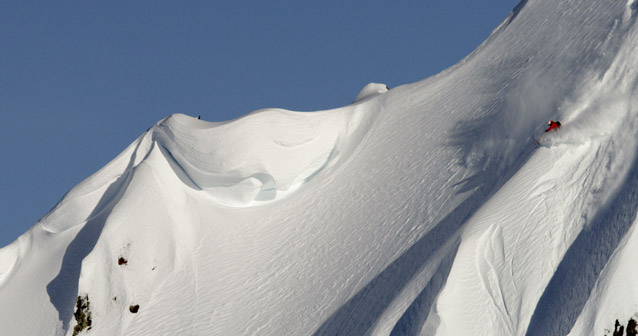 Talk a bit about the moment the heli pulled away.

We rolled up to a zone called Tappas and Illusions and it hit me.  We were staring at our runs from across the valley, unsure of how big these lines were.  The next second me and my good friend Essex are doing a gnarly toe-in, where the heli is just hovering and barely touching the ground and you hop out, at the top of the line.  It hit me, like, “Holy %#&@! We’re in AK boys!”  It was a knife-edge ridge with our run on one side and cliff exposure on the other.  The guide went to another spot to help another person in our crew, Kent Kreitler, get into his line.  So, here we are, me and my buddy at the top of this huge run, third drop in AK, no guide, and now I have to crawl around the backside of this face to get to my run.  It was one of the scariest moments.  But once I got over to my run and clicked into my skis, everything went blank and I focused on skiing and I forgot about the fear and everything else.

Your favorite moment from the whole trip?

Last run of the day we were pressed for time to make it to this big spine run.  We had 30 minutes to set up the filmer and ski the run, which is not much time in the grand scheme of things.  To get into the run we either had to drop a 20ft cornice or traverse over death exposure for about 30ft.  Once Kent went it was my turn to go.  I didn’t really have time to think about the traverse and just went.  Once in the main run, the heli gave me the go signal and I just started to ski.  Before I know it, I’m riding a 1500ft spine run, with epic snow and light.  It was wild.  The heli ride back to the lodge was a blur. 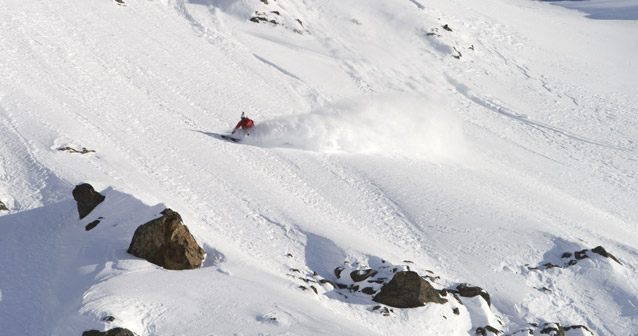 A word of advice for people considering heading to Alaska? Anything you wish someone had told you before you went?

Do it.  It’s a crazy experience.  I only had a day and a half of actual skiing and in that time my perspective changed. Forget about any expectations.  You can’t imagine this.

If you want to ski big lines, train yourself to look at mountains, to judge what the snow is like, estimate the vertical relief. You need to be able to take a picture and scout a line in about a minute.

Also, I’d recommend bringing a good book or two to read on the down days as well. 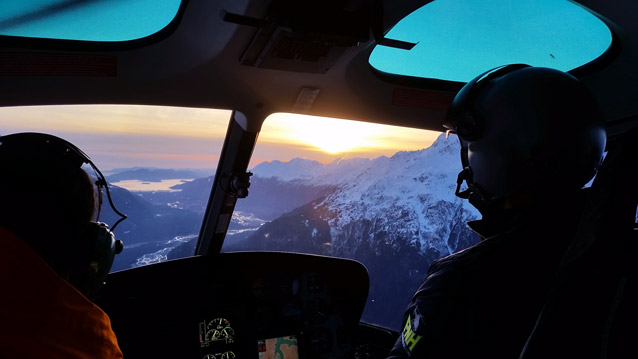 Big shout out to everyone at Points North Heliskiing. All of the guides there are awesome on and off the mountain.  Thanks to Andrew for showing us an incredible day in the heli and getting us into the terrain safely.

Thanks to Tony Harrington, too. He was the filmer and photographer during the trip, and also puts on the World Heli Challenge down in New Zealand.  He just released an awesome surf film called The Barrel.

Thanks to Essex Prescott and Kent Kreitler as they were an awesome crew to be skiing with and gave invaluable advice.

Finally, thanks to the parents for taking me up to the mountain and making me the skier I am.

Can’t wait to get back up there!