The 10th Edition of GoPro Hero is here! The HERO10 Black is the latest and greatest from the action camera brand. It is hard to believe we’ve had this many iterations, it seems like just yesterday that we were following friends around toting a GoPro HD Hero 1. The HERO10 Black has certainly come a long way since those days. We got an early look at the HERO10 Black and put it through its paces, from mountain biking, to fly fishing to see how it performed.

At the heart of the HERO10 Black, is the new GP2 processor that makes all the improvements possible. GP2 delivers up to 2 times the performance of GP1 meaning you can get higher resolutions and faster frame rates to suit all of your video needs. Speed with ease is the name of the game with the Hero 10. Faster startups and smoother previews make using the GoPro easier and faster than ever. The UI feels more like a smartphone, so navigating HERO10 is also easier than ever. Once you are done shooting the camera pairs with the Quik app to perform wireless transfers 30% faster than previous GoPro cameras, so you can get to sharing and editing even faster. GP2 also enables features like HyperSmooth 4.0 and higher resolution photos.

GoPro HERO10 Black Starting at: $391.99
*Pricing is with a GoPro Subscription

Can you say 5.3k at 60fps and 4k at 120fps? That’s all I need to know to be sold on this camera. Those sorts of specs can really stand up to the much larger and more expensive cameras on the market. The fact that the HERO10 Black can produce these high-resolution videos in such a small package is still hard to believe. The 5.3k looks incredible, the detail the camera is able to resolve is impressive. While mountain biking through an aspen forest with fall colors starting to pop; you can really see details in the leaves.  You can also pull super crisp, print-quality frame grabs at 19.6MP resolution from 5K 4:3 video. You’ll never have to choose between photo and video again – just shoot high-resolution video and grab your favorite still shots later. The 60fps gives you really smooth footage at high resolution that you can even slow down 50% and reframe as needed when working on a 4k timeline. The 4k footage from HERO10 Black also looks stunning. With 4k you can slow down to 120fps to get super smooth high res slow motion. It is hard to beat that in such a small versatile package. If you really want to slow something down you can get 240fps at 2.7k giving you still a lot of resolution to work with and 8x slow motion. For photos, you are looking at 23MP files upgraded from the 20MP on the Hero 9. All of this is thanks to GP2 Processor.

HyperSmooth has been one of the biggest advancements that have come to the action camera industry since its inception. To be able to ditch the gimbal and rely on electronic stabilization to produce incredibly smooth footage in-camera that looks natural and retains the quality of the video is something that seemed unfathomable just a few years ago. Now on the fourth iteration of HyperSmooth we’ve got a near flawless stabilization platform that allows your creativity to run wild. One of our favorite features is the in-camera horizon leveling with a tilt limit up to 45-degrees when shooting in 4K60, 2.7K120, and 1080p120. Creating that floating camera effect we all love. While mountain biking down a fast rocky trail using the chest mount the HyperSmooth produces a clip that is enjoyable to watch that would otherwise be unwatchable. 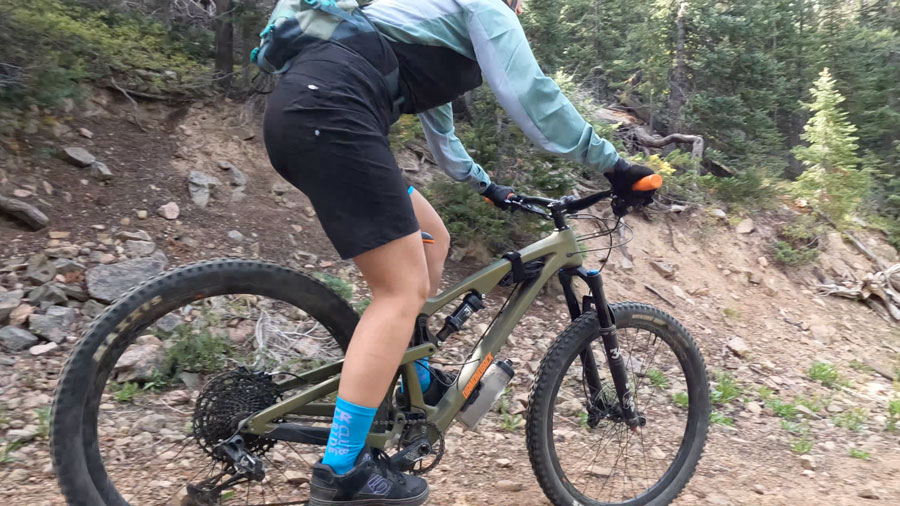 The GoPro HERO10 Black is completely compatible with all of GoPro’s suite of Mods like the Max Lens Mod and Media Mod and also uses the same batteries. Have no fear upgrading all of your accessories will be cross-compatible. The GoPro Quik app is your one-stop shop to upload, edit, and share your footage. With a GoPro Subscription you get added benefits in the app as well as Auto Uploading your footage to the cloud. You will also get advanced editing tools in the app and features that aren’t available to non-subscribers. GoPro also introduced a wired content transfer option on HERO10 Black that makes content transfers up to 50% and saves battery—this will be money for sharing content on the go.