Use this guide to decipher the jargon of whitewater kayakers, try your hand at conversing with them in their native tongue or just familiarize yourself with the lingo.

Beater: Describes a multitude of ways kayaking can go wrong. From getting thrashed in a hole to slamming against rocks, beatering is certainly never a good thing.

Boof: A technique used to land a kayak on its hull (parallel to the water) during freefall. The term boof is onomatopoeic, referring to the loud sound the bottom of a kayak makes when smacking a pool of water. “Boof!” 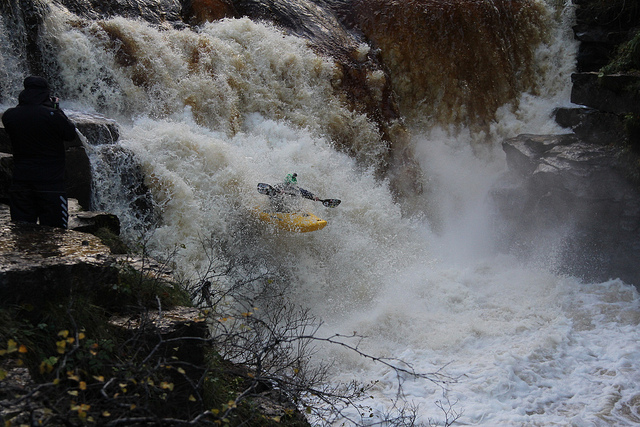 Booty Beer: A longstanding tradition among kayakers: the notorious booty beer. After a wet exit, you owe it to your paddling buddies who saved you, your boat and your paddle from downstream carnage. What better way to pay them back than by a public act of shaming? To perform the booty beer, pour a preferably cheap, light beer into your neoprene booty and chug. This is the only way to restore balance to the paddling universe.

Carnage: Crashing, beatering, chundered: they all refer to carnage. Plain and simple, carnage is any sort of mayhem or havoc that a paddler or group of rafters finds themselves in.

Carping: Coming up frantically for a breath during a failed combat role. Resembling a fish out of water.

Chundered: The act of being beat down in a hole or some other nasty feature. No one likes to get chundered.

Combat Roll: A maneuver used to flip a capsized boat upright. The Combat (or Eskimo) Roll is an essential skill for any level of kayaker. 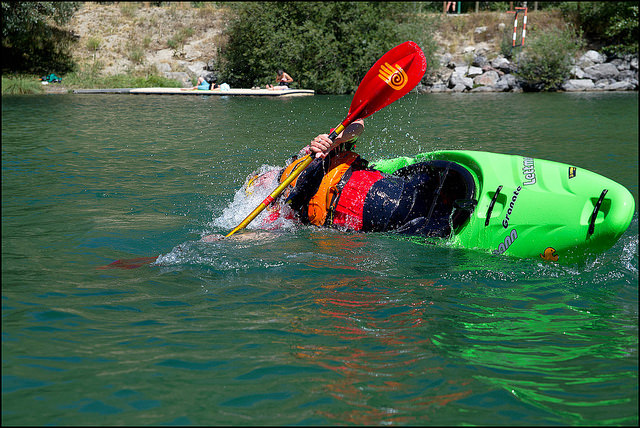 Eddy: An eddy is a point where water flows around an obstruction, such as a rock, and then reverses course to fill the area behind it. Eddies provide resting points from the flowing current and allow kayakers to stop, regroup, and plan the next course of action downstream.

Groover: The Groover is an ammunition can that acts as a portable toilet on river trips. Groovers derive their name from the early models, which didn’t have seats and would leave attractive red lines on your backside. Don’t worry; most modern day groovers come equipped with a comfy seat to protect your precious posterior.

Seal Launch: A seal launch can either be performed out of necessity or simply just for fun. To execute a seal launch, secure yourself into your kayak and launch off a rock or cliff into the river. It is the equivalent of sending a waterfall without a current pushing you over the edge. Don’t forget to bark like a seal after you flawlessly carry out this maneuver. 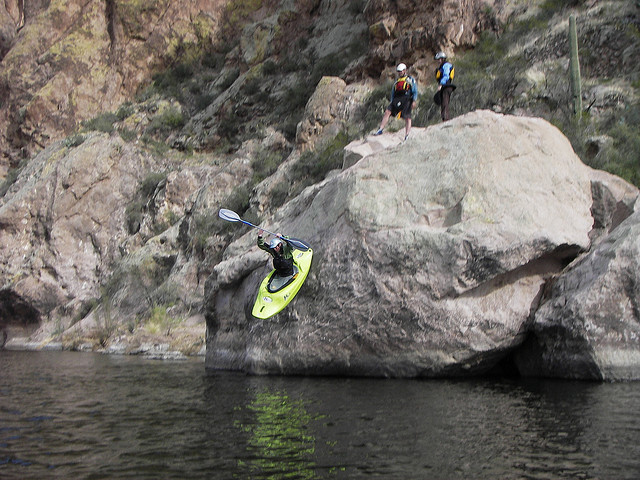 Hole: A hole is a point where the current flows over an obstacle and then reverses flow back on itself. Holes can stop a boat dead in its course and make it difficult to continue downstream. The best way to navigate a hole is to “punch” through it by leaning forward and paddling hard.

PFD:  Say the word “lifejacket” around any paddler and you are in for a hard lesson: lifejackets won’t save your life. Instead, boaters use the term PFD (personal flotation device) to describe the piece of equipment that can float, knowing that it won’t necessarily save your bacon.

Sieve: Water flowing through a group of rocks. Sieves can easily trap a boater and should be avoided.

Stout: Refers to a rather large rapid, slide or drop. Stout can also be used to describe anything big, burly or aggressive. 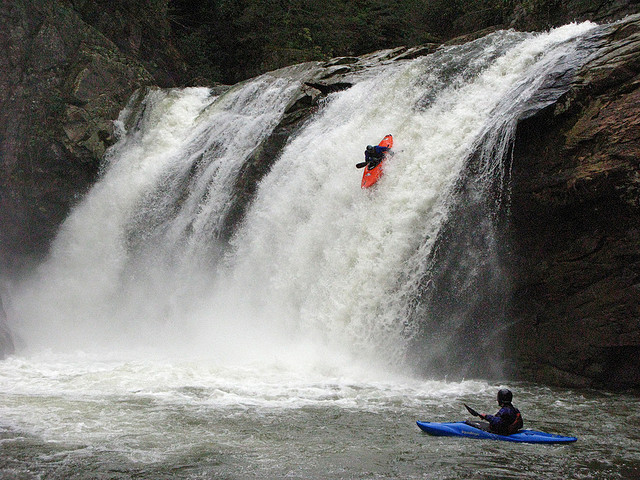 Strainer: A strainer is brush or a downed tree usually encountered on the outside of a bend where the current is strongest. Strainers may allow water to flow through but can stop a craft from passing downstream. Strainers pose a major threat to paddlers and should always be avoided.

Wet Exit: A wet exit is the last resort for kayakers when the combat roll fails. The act of wet exiting involves pulling the front loop of the spray skirt so that it detaches from the coaming (the piece around the cockpit where the spray skirt attaches). Wet exiting can be dangerous and should only be performed when a kayaker is trapped underwater.