Ear plugs. Call them essential when you travel with ROW Adventures to the offshore islands in the Sea of Cortez.  Why?  The persistent sound of three-foot manta rays launching skyward — and belly flopping down — in the bay near your Isla Danzante campsite is beyond relentless.

And the blazing light of the Seven Sisters constellation (aka Pleiades) piercing through your tent’s mosquito-netted top?  It begs for a sleep mask.  Or the immediate purchase of a Subaru Outback when you return home.  These are among your toughest challenges in launching from Baja’s hospitality base in Loreto into one of the most singular adventures of your life. 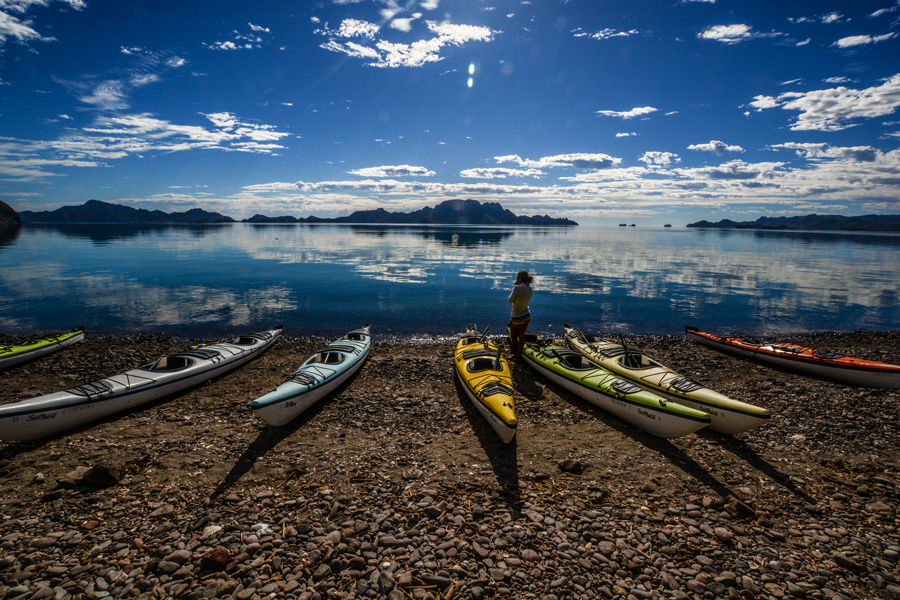 On the company’s “3 x 3” adventure, Sea of Cortez kayaking is paired with grey whale watching in Magdalena Bay, some two hours southwest of Loreto.  Depending upon wind and weather conditions, paddles may be preempted by pangas (25’ motor launches for whale watching).  We’d returned triumphant from whale camp, having succeeded in guarding our sandals from pilfering coyotes patrolling the windswept dunes of our offshore base.

Following a night’s repose in the seaside Hotel de Mision – along with an important safety briefing – the group of twelve shuttled south along the coast to Puerto Escondido.  There, the clean, tidy quay and compact bay guard a flotilla of American expat sailboats sporting home ports of Vancouver, Seattle, Portland and San Diego.  Apparently, the lure of the area frequently halts global circumnavigators who surprise themselves by making it a seasonal, day sailing home.

Our reasons for launching single and tandem Seaward sea kayaks into the Sea on this sunny day had little to do with sail-borne visitors, at least the first ones.  In 1539, Francisco de Ulla was sent by Cortez to confirm or deny the fantastic rumors circulating in Spain.  Allegedly, an island here was ruled by Amazon women armed with weapons of gold who guarded innumerable beds of sparkling pearls.

Truth be told, shiny objects were among our objectives, paddling three miles of open water to camp on the 37,000 acre Isla de Carmen.  Ringed by remote bays with designated primitive camping spots, the island is part of the Loreto Bay National Marine Park.  This preserve, the largest of Mexico’s three such aquatic zones, enshrines five islands and nearly 800 square miles of ocean. 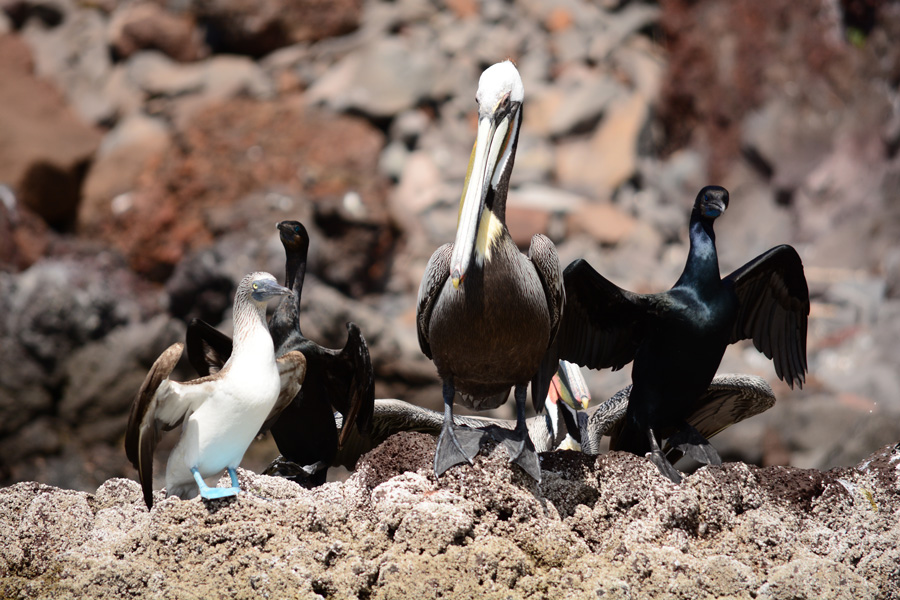 Here, treasure has fins and darts between reefs, skitters across shallow, sandy bays at the same time the winged variety soars on thermal air currents above.  More than 900 varieties of fish along with 2,000 species of marine invertebrates inhabit what’s considered the Earth’s richest body of water.  Indeed, we sought golden flashes below by bringing snorkeling gear along with binoculars to spy beaked riches including blue-footed boobies sequestered above on tall, offshore rock pylons.

Thanks to ROW’s strategic encampment on Magdalena Bay during the 3 x 3’s first segment, we’d been bedazzled by glittering objects already.  Answering nature’s call at 4:30am one morning, a starlit beach hike had ensued.  Not to be outdone by the heavenlies, the ocean shone forth at my feet with every sandy step northward.

The human eye is sensitive down to .25 lumens but the wave-borne, phosphorescent plankton pulsing on the sand below needed no such grace.  Triggered by the mechanical action associated with scraping against the sand, pinpoints of chemical luminescence burst forth and quickly faded.  A return, tide-powered trip to the ocean would follow to regenerate them into tiny diamonds once more. 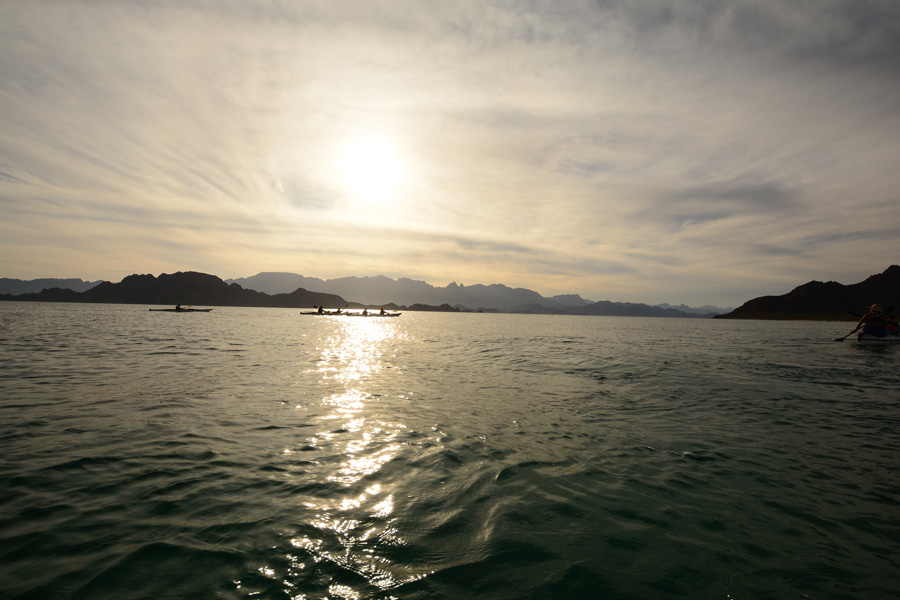 Now paddling Cortez in torso-turning cadence, the sea kayaking team emerged from the protected bay into rolling waves and searing sunlight.  With fewer than 15 minutes of diligent paddling behind us, a sign of things to come burst from the water off the starboard bow.

Three feet long and over four wide, a manta ray rocketed upward.  Two great flaps issued from its airborne body before gravity prevailed.  Not certain whether this was a single occurrence, the group shouted enthusiasms back and forth.  Ten minutes later, another first manifested itself in front of this assemblage of experienced travelers.

A school of 20 or more flying fish took to the sky, again to the starboard side.  Much like smooth rocks being skipped across a pond, their contact with the water’s surface seemed less than momentary.  Perhaps pursued by yellowtail that can weigh in at up to 90lbs, the school’s appearance gave evidence to an underwater energy beyond measurement in volts or amps. 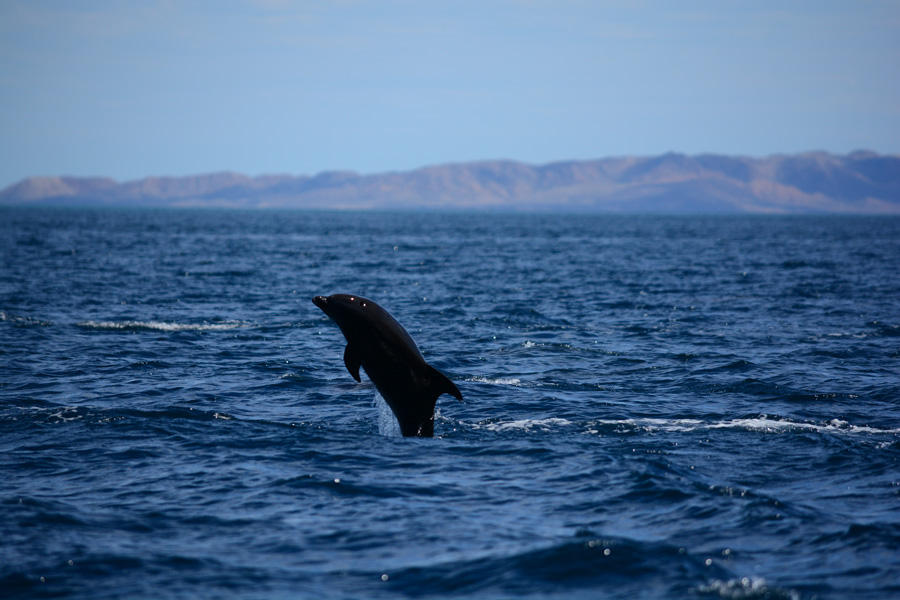 After two hours of paddling, Isla de Carmen abruptly rose up ahead as the water morphed from deep sapphire to aquamarine blue.  Five bottlenose dolphins crossed our path, welcoming the ROW group to a rugged landscape softened by smooth sand beaches.  Once again, our hosts preceded us by motor launch to proffer cold drinks and wide smiles in celebration of our overwater passage.

Turning from a table topped by platters of artfully-carved pineapple dusted with chili spices, the landscape of the region hit me powerfully and instantly.  Far from soft or rolling hills and idyllic mountain vistas, the starkness of the visible geology registered as profound.

Much like Matt Damon surveying the Red Planet in “The Martian,” rock and ridge appeared, knifing into the sky before plunging into the ocean (not dust, in this case) below.  More like extinct volcanoes on an ancient planet, this terrain has challenged inhabitants for thousands of years.  Only by seeking hidden canyon streams and raindrops collected in cleft-carved pools was enough fresh water found to survive.  At least for brief, still arduous periods of time. 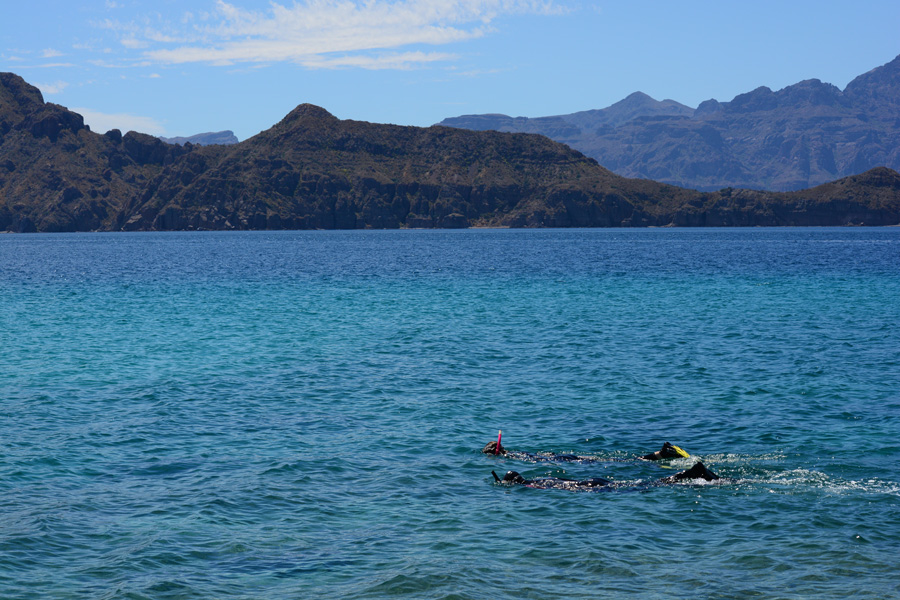 Over the next few days, kayaking, swimming, snorkeling, hiking and (thanks to the generosity of Boardworks) stand-up paddling tipped the scales toward memorable, photo-worthy moments.  At the same time, tart margaritas, chicken mole and camp-made chocolate cake turned flying mantas and peerless stars into times of storytelling and laughter among group members.

On the last day, the push back to Puerto Escondido meant paddling hard against the wind.  Even absent any new spectacles appearing from the deep, the stark contrasts of the Sea of Cortez were more than enough.  Between each stroke, stone and water merged into a rare beauty we were, to a person, reluctant to leave.