Carnival-colored life vests, the sort you’d find at a U.S. dollar store, are doled out to the group winding its way, conga line-style, to the securely-moored boats ahead.  My fellow travelers commit – out loud and with true sincerity -- to combing the seaside gift shops after whale camp, resolved to leave some hard dollars among diligent local seashell artisans. 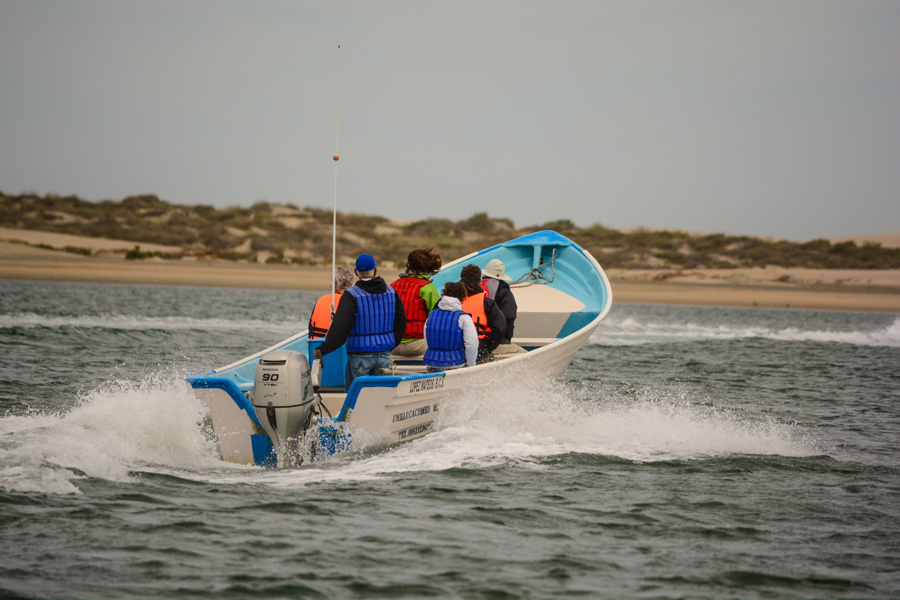 Straight head, deep-hulled 25ft pangas bounce and sway like anxious saddle horses itching to run.  Mercury-made 115hp outboards patiently churn the water at the stern as we’re guided to our three-across seats. And within minutes, its on.  Whale watching, that is.  With only 50ft of water below the keel and a channel less than a mile across, the odds of close contact are in our favor.  Immediately, the percentages ring the bell at 100.

Minutes later and well within 100 yards, grey whales materialize on both sides as the boat glides into Magdalena Bay at the command of our local captain.  As with his peers, he’s a proud member of the tightly-knit cooperative of guides shepherding guests out of Lopes Mateos – and committed to respecting the enormous creatures appearing annually in the surrounding waters. 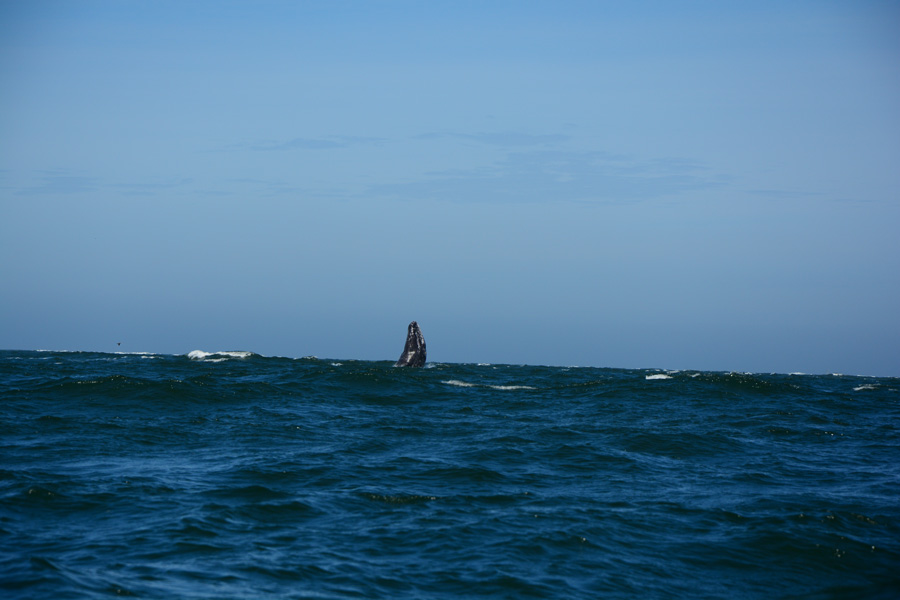 Dominated by cow-calf pairs, the grey whales circumnavigating offshore, uninhabited islands arrive here annually to conceive, birth, raise and prepare the next generation to sally forth back to the Arctic Ocean.  Journeying northward over 10,000 miles, their upcoming migration is among the longest of any species in the world.  As in millennia past, mortality among this year’s calves may well eclipse 50%.

Boats now fan out as the leviathans cruise back and forth in the sun-warmed Mexican waters. Devoid of predators, Magdalena Bay is short on food as well.  The reason?  Grey whales take no interest in schooling fish crossing their paths as the Arctic Ocean’s sea floor is where they’ll dredge the bottom for tiny organisms to fuel their 45 foot-long frames. At present, nursing females convert half of their body weight into milk for their single offspring. 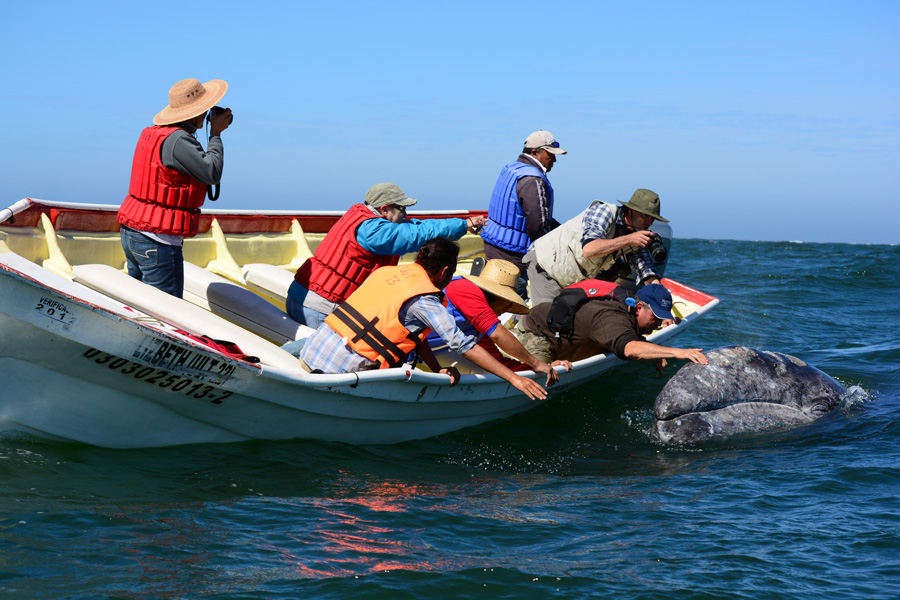 Two hours (or was it ten minutes?) of observation sends our craft hopscotching northward, sharing the bounty with other boats.  Approaching a break between islands, the Pacific swell tops out at over 6ft as the tide challenges the Merc to stand firm in its assault.  No worries even as the boat pitches and yaws in harmony with the ocean and in concert with the grey whales.

This is my first encounter with large marine mammals.  Their frequent rising to breathe – up to nine times before diving – sounds like water being blown from a hollow PVC pipe purchased at Home Depot. Somewhere between a loose rattle and deep resonance, the cows patiently endure the frequent, less effective efforts of their beloved, small-lunged calves. Bedecked already with barnacles, the distinct, mottled appearance of each whale makes it easier to identify individuals inhabiting the Bay.

ROW’s whale camp comes into view, a white geodesic dome presiding over a scattering of two-person green wall tents.  Tall enough in which to stand while secure against ocean winds, they hug the dunes as each opens wide to the whale-rich bay on the east.  Solar lanterns shine forth even as stars and planets show themselves well before the sun’s finale. 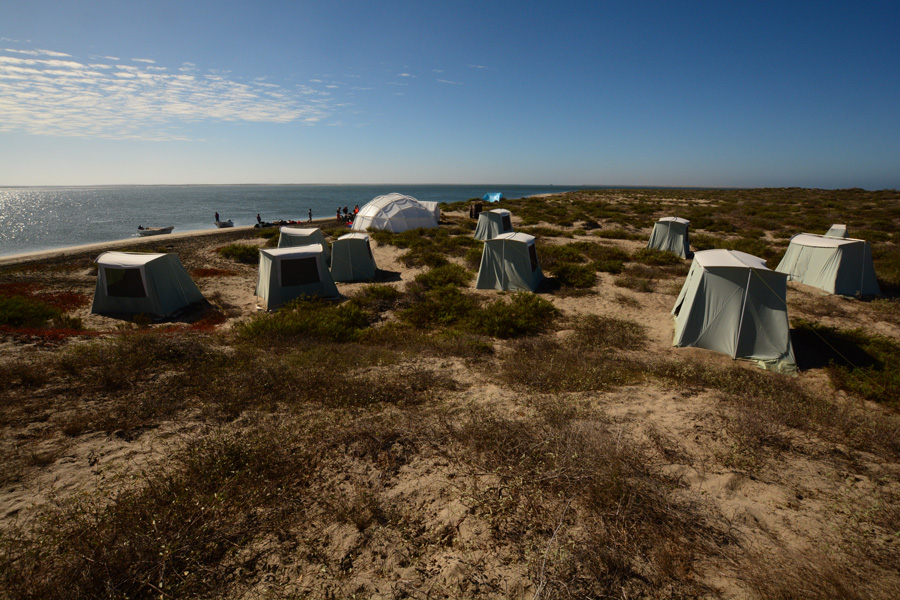 With chairs already arrayed along the beach’s edge, camp manager and cook Rosalita welcomes us home.  Her sublime fish tacos echo the freshness of all that surrounds the camp.  Paired with chilled Pacificos, the bounty seems as generous as the day’s catch of whale watching memories.  I unload memory cards from three cameras, anxious to keep their pixels safe from the cool salt air.  Elapsed time since Loreto:  a mere seven hours.

As if to demand equal time, bottlenose dolphins parade alone and in pairs less than 50 yards from the dinner table.  Dipping and diving, they energize the darkening waters.  With forks in hand, the group celebrates the day with homemade cheesecake illuminated by moonlight.  But not before the sun floods the western sky with crimson.  The neon variety.

Morning is an overstatement to the curious and compelled, the intrepid guests up and moving even before 5AM.  A pre-dawn run to the south tip of the 12 mile-long island reveals caches of hurricane- and wave-borne shells deposited deep inland.  Along the way, tiny orange fruit sprayed across the fruitilla plant’s branches tastes vaguely like the tomato that Rosalita’s pico de gallo celebrated – and spurs an early appetite for breakfast ahead.

Rejoining the now-awakening camp, the smell of coffee energizes the group.  Relentless in the tutelage of their 15 week-old calves, the cows ferry their charges back and forth in front of us in cadence with the tides.  Once again, and well before 8am, less than 200 yards separate us from this ancient, Magdalena Bay metronome of giant mammals. 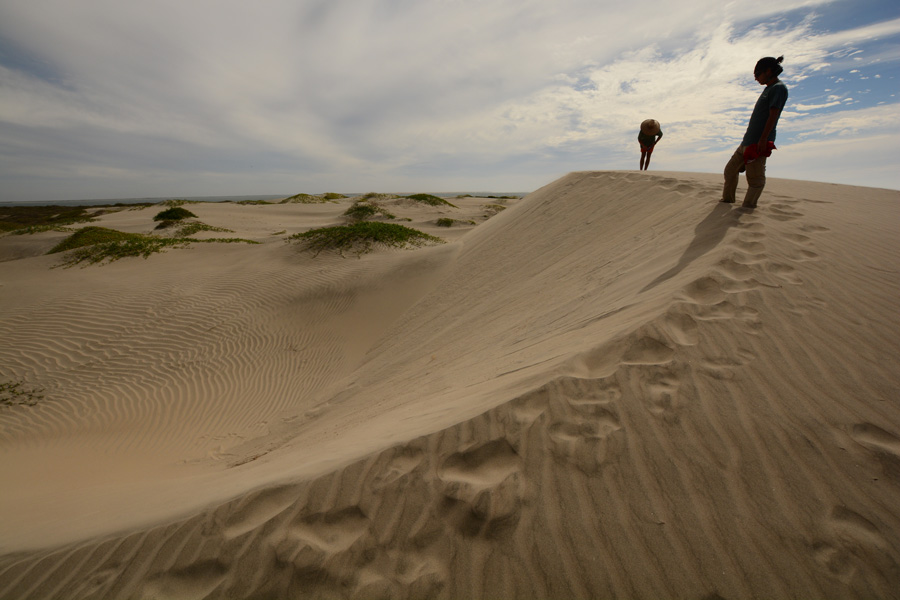 Now clawing, sliding and skating westward on a hike across the island’s shifting dunes to the Pacific side, the view elevates the entire whale camp experience.  Again.  Even with the benefit of a mere 30ft rise, the plumes erupting from the whales cruising below appear like the scalding water jettisoned from Yellowstone’s storied geysers.

Three, six even nine pairs and some males populate the horizon and move through the break to Magdalena Bay, propelled by the tide’s growing turbulence.  Incomparable.  Surreal.  A living landscape that never remains static.  An orderly display of cetacean majesty played out against a savage backdrop.

Pelicans and frigate birds mass on a spit of land 300 yards to the north, unaware that the ocean’s pulse is felt by the transient, camera-toting mammals on the beach. Or that these waters nurture the immense creatures circling offshore, over a hundred grey whales preparing to brave exhaustion and orcas on their homeward trek less than 60 days from now.