Size, they say, is relative; one man’s mountain is another’s molehill. With measured expectation, I elected to hike Ireland’s highest peak. At only 3,406 feet, it certainly didn’t possess the grandeur of Colorado’s 14ers. Yet, as a downstream member of the Mahoney clan, it became my duty to see the homeland from its highest point; in the event weather allowed for a legit view. 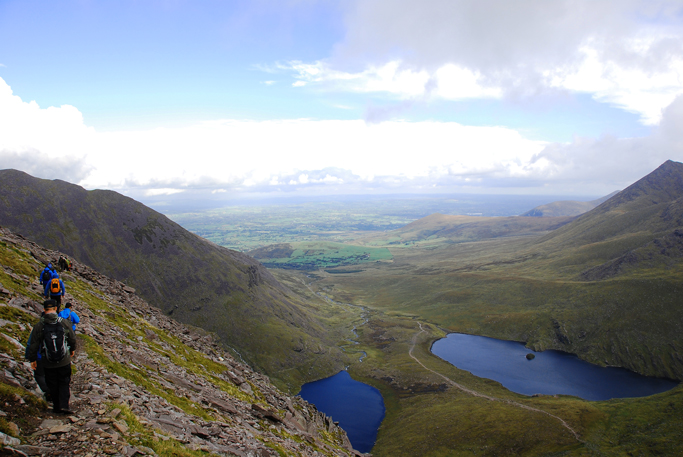 Carrauntoohil stands as the central peak of the Macgillycutty’d Ridge in County Kerry, a region so green as to embody every Emerald Isle cliché. Its Gallic name, “Corren Tuathal,” means inverted sickle or fang. From the trailhead, the peak resembles an almost-perfect isosceles triangle rising from the rock-strewn landscape.  The singular shape remains striking as you hike northeast through Hag’s Glen along a narrow single-track trail, one tracing the serpentine path carved by a steadily flowing river.

All Four Seasons—In One Day 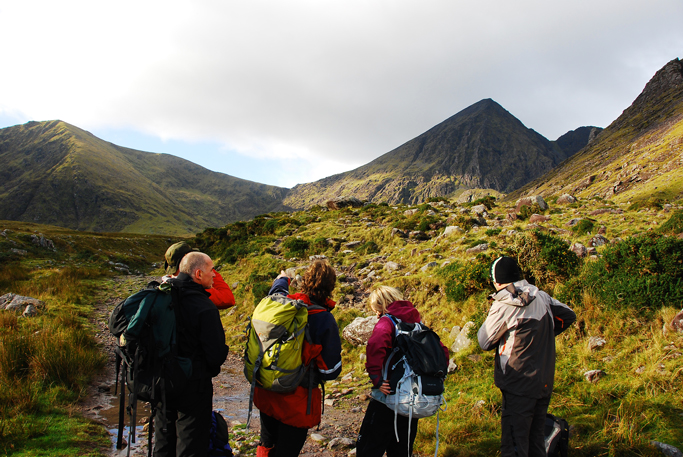 Starting the hike, the weather proved ominous. Heavy layers of low, gray clouds punctuated the greens of the surrounding countryside paired with a cold, constant wind. It felt more like winter than autumn. But by the time we reached the first small stream crossing, the clouds had faded and an October sun shone brightly, spotlighting the rippling surface of two glacial lakes on the glen’s opposite side.

That shining sun would not last. Upon reaching the Devil’s Ladder route, one of the more direct approaches ascending directly up the mountain via exposed rock scrambles, the clouds were back; with them came a steady, cold drizzle. 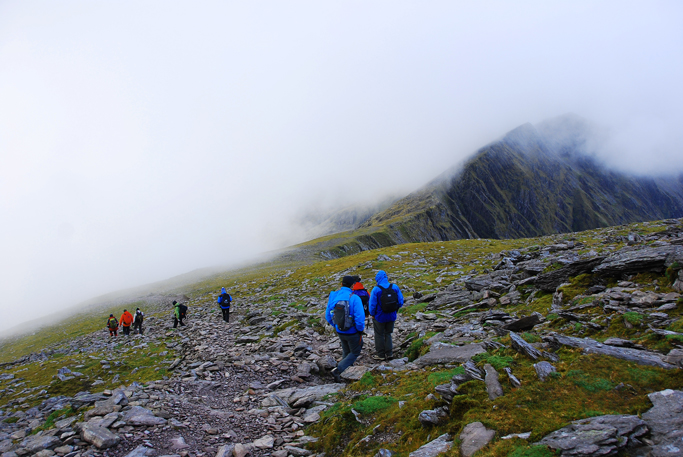 Only minutes later came the hail.  Blueberry-sized chunks clattered on my rain shell and made me curse my lack of gloves. The rocks became dangerously slick as we traversed over waist-high boulders.  One serious slip meant tumbling down the near-vertical pitch we’d just climbed.

Fortunately, winter weather gave way to spring once again. Welcome sunshine allowed us to shed our layers before traversing steep switchbacks carving a V in the mountain range. At the ridge, we angled left, buffeted by winds previously sheltered by the mountain.  Pushing to the col, we stepped through softball-sized rocks, navigating by a loose collection of stealth cairns that almost looked simply like random piles. The guiding presence of the tip of the mountain, visible just off the horizon, proved invaluable.

If You Don’t Like the Conditions, Just Wait Five Minutes 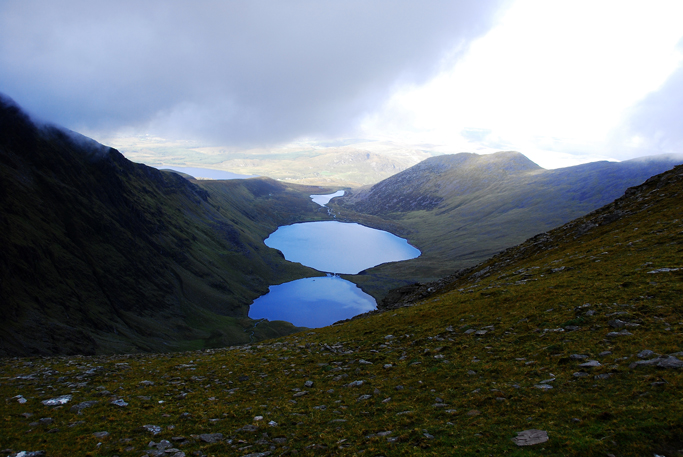 Well, it was visible for a moment. Dense fog floated across the slope, enveloping us like pea soup. The peak disappeared, masking the glen’s glacial lakes in a pool of gray. I stopped to toss on another layer and was fortunate enough to catch one photo of the glen as the fog lifted for but an instant. Carpets of green earth beckoned, punctuated by haphazard rock piles and those same glistening glacier lakes, but catching up to my party became the priority.

The summit, marked by a cross Wikipedia now reports as missing, holds collections of rocks stacked into large, wind-blocking circles. Shivering, I silently gave the mountain the respect it deserved and waited for clouds and fog to pass; the Mahoneys deserved another brief peek into the otherwise-obscured landscape surrounding us. I shot a quick photo with my phone (later posted to Facebook, proclaiming “I can see my heritage from here!”) before following the trail as it carved down the backside of the mountain through a wide scree field of black and brown rock.

As we got lower, the sun returned, now triumphant and soothing. Wild goats (perhaps dismayed by our fluorescent rain jackets) watched us from the ridgeline as we descended a narrow chasm in the mountain. Soon we were back in the basin of the wide glen, crossing to the opposite side of the river via a footbridge.  A wide dirt road culminated in a coffee shop and small parking lot amidst a scattering of humble farmhouses.

Here we rested, refueled, and waited for our ride.

While I can’t pronounce Carrauntoohil, I’ll never forget it. 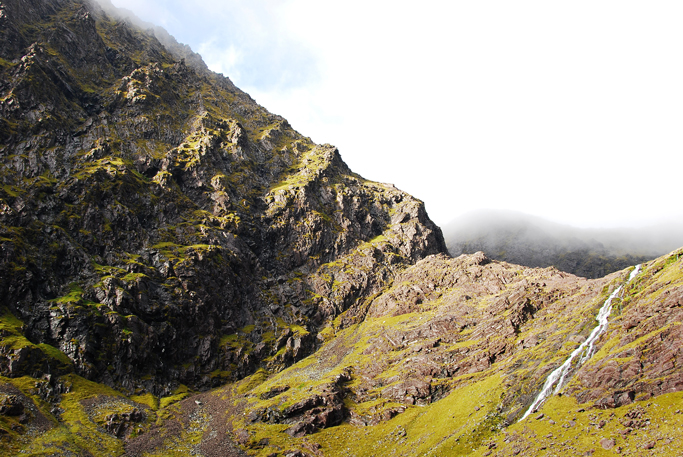 You can take on Carrauntoohil in about half a day, but unpredictable weather may add 60-90 minutes. While you can self-guide, consider a guide service like Outdoors Ireland.  They’ll can get you to the trailhead, help with the ascent and direct you to that charming coffee shop at the end.

The nearest town is Killarney, about an hour’s drive from the trailhead. The agreeable village boasts a wide range of accommodations and decent restaurants; several of Ireland’s famed pubs occupy the town, one that guards the entrance of one of Ireland’s most magnificent national parks.