Not far from the Loreto town center, in the marina and beyond, aquatic adventures multiply like fish on a nearby protected reef.  From wallowing sea lions to swooping cormorants – and the world’s largest creature, the blue whale – nature is escapable.  And while the Bay beckons, laid back Loreto’s not to be ignored.

Recent sea kayaking and whale watching with ROW Adventures connected me with their local outpost to embark on the “3 x 3” itinerary.  Anxious to make the easy, direct air connection from Los Angeles and get my paddleboard wet, the town itself first seemed to be simply a humble source of supply and reorganizing between the two, three-day elements of the trip.

Far from a pin drop on the map and an efficient way in and out of breathtaking Baja, the town itself became my destination the afternoon prior to departure for whale camp accessible by panga from Arturo Lopez Mateos, two hours away through striking mountain canyons.  My first clue?  The sublime hospitality at the La Mision Loreto directly opposite the seafront boulevard. 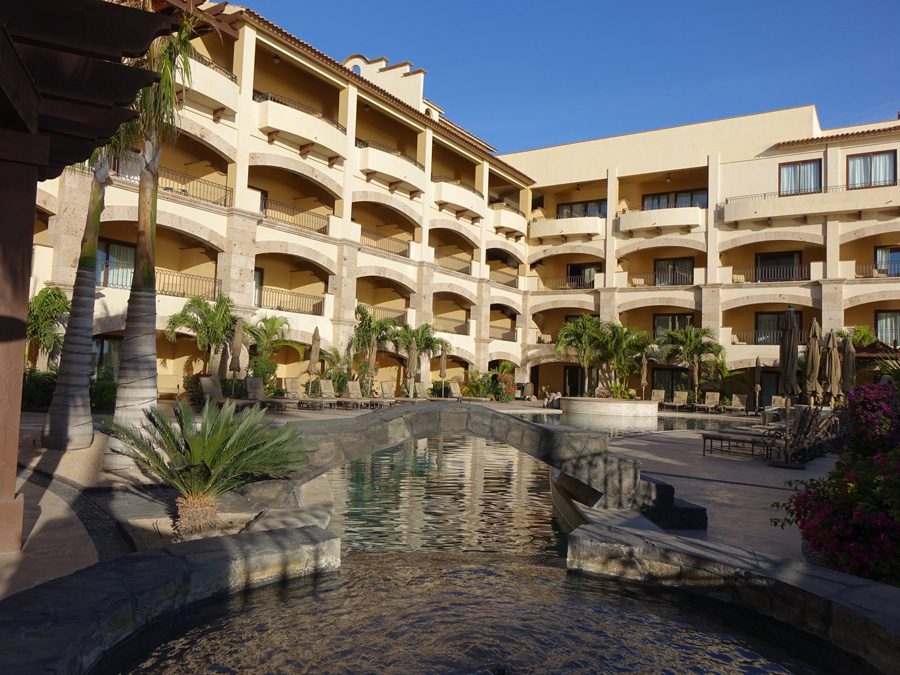 More like guardian angels for newcomers than aloof denizens of the town’s most well-appointed hotel, the front desk, concierge, restaurant and bar staff were genuinely glad to see all who strolled through the sunny front doors.  To the right, sparkling pool waters were bordered by an open bar and pizza oven.  Above, a morning breakfast buffet to fuel serious outdoor endeavors was offered on a broad dining terrace facing the rising sun.

Other lodging options revealed themselves at every turn and crossroads of the main road into town.  Basic hostels to four-room B&Bs sat within one-half mile of the water, with other full-service hotels ranging up to two miles inland.  Further down the winding coastal road, golf condominiums offered up luxury overlooking emerald greens for guests with rental cars.

More importantly, the pedestrian walkway through the heart of town became the lifeline for reaching two, well-stocked groceries stores (Casa Ley and Supermercado Pescador), cafes, galleries, gift shops, a brewpub and the must-see Mission museum.  Never on this wide, paved path – nor anywhere in the town – was there a sense of peril or hint of disregard for personal safety during my brief stay.  Clearly, vigilance is always important but Loreto didn’t send the visitor running for their hotel room’s safe box at every turn. 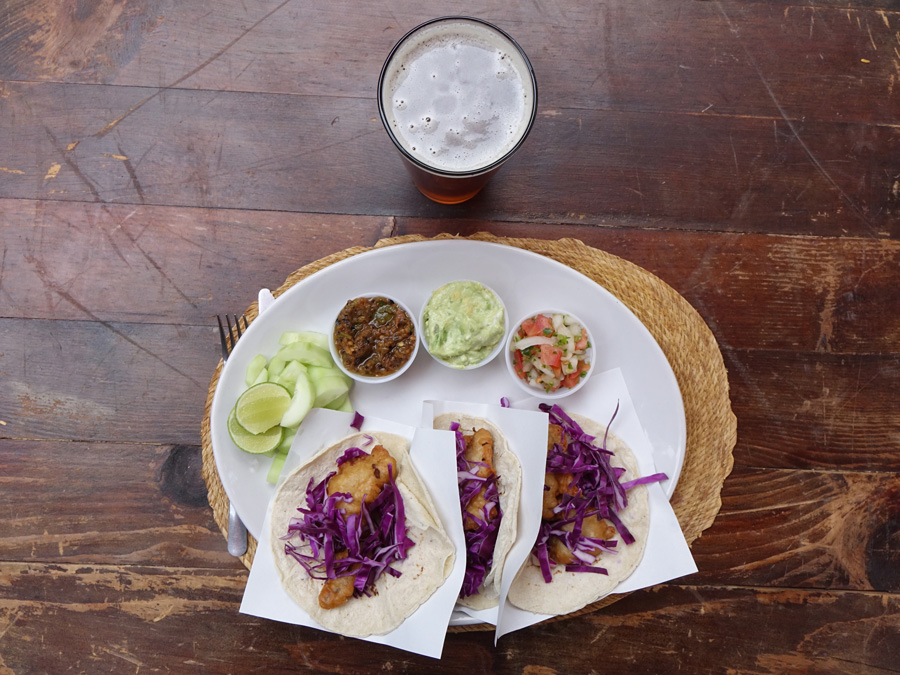 While fresh-caught fish tacos and cold Mexican beer predominated, pizza, pasta and American-style cuisine rounded out the dining options with a couple of beguiling Mediterranean choices popping up every few blocks.  Most notable among the first cadre was the El Zopilote Brewing Company (and companion 1697 Restaurant) founded by the cheery Kieran Raftery (hailing from Ireland) and his wife Norma, born and raised in Mexico.  “The Buzzard” excelled with Rattlesnake IPA as a straight-ahead pint compatible with their, you guessed it, trio of fish tacos replete with multiple garnishes.  As with most every restaurant explored, ingredients won for freshness at prices about 20% above street vendor tariffs.

Between meals and refreshing beverages, the straw hats and metal sculptures bursting from market stalls and shops merited 30 minutes of examination, with Mexican silver jewelry the prize catch.  Art lovers needed to throttle back their expectations as most ocean-dominated landscapes were reproductions or souvenir-quality attempts at unbridled expression (a few exceptions can, however, be found with diligent searching).

Long before expansive ocean promenades, Cuban Cohiba cigars (check their freshness first) and the creamy key lime pie served lovingly at Elli’s Pies north of town, a wilder and cruder way of living dominated the Baja Peninsula.  Next to the well-preserved Our Lady of Loreto church resided a museum (admission, 50 pesos) housing artifacts dating from well before the appearance of Jesuit missionaries. 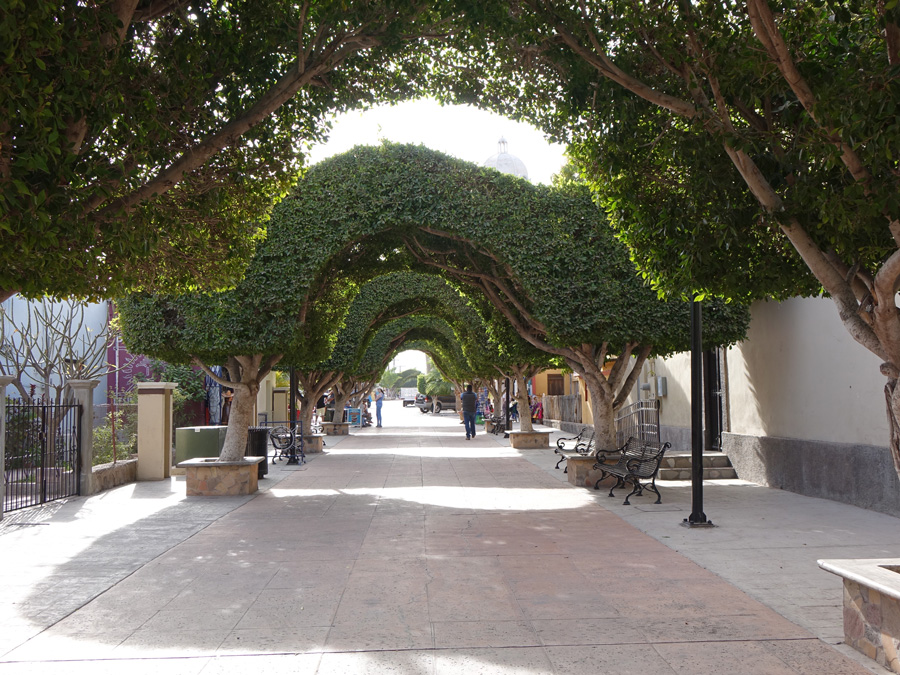 More closely akin to the early peoples of the Australian bush, the first inhabitants lived without shelter, little clothing and nary a fishhook in their hands.  Simple hunting and gathering centered on finding fresh water along with seeking rocky shelter from winter winds.

Whether a fan or not of the Spanish missionary journeys commencing in 1683, the brothers themselves became studies in survival tactics, with only moderate improvements in their living conditions.  Beyond the shoreline, food remained scarce and sustainable productive agriculture more fantasy than reality.

For the self-guided visitor looking to escape reality back home, provisions for self-guided outdoor adventures were few and of poor quality.  That included bikes and bike parts as well as camping gear such as stoves and tents. Paddling rentals and fishing tackle were a better bet (in season only, in many cases) while larger sizes in any technical clothing or outerwear remained virtually absent.  Even high UPF sunblock and professional-grade sunglasses proved rare. 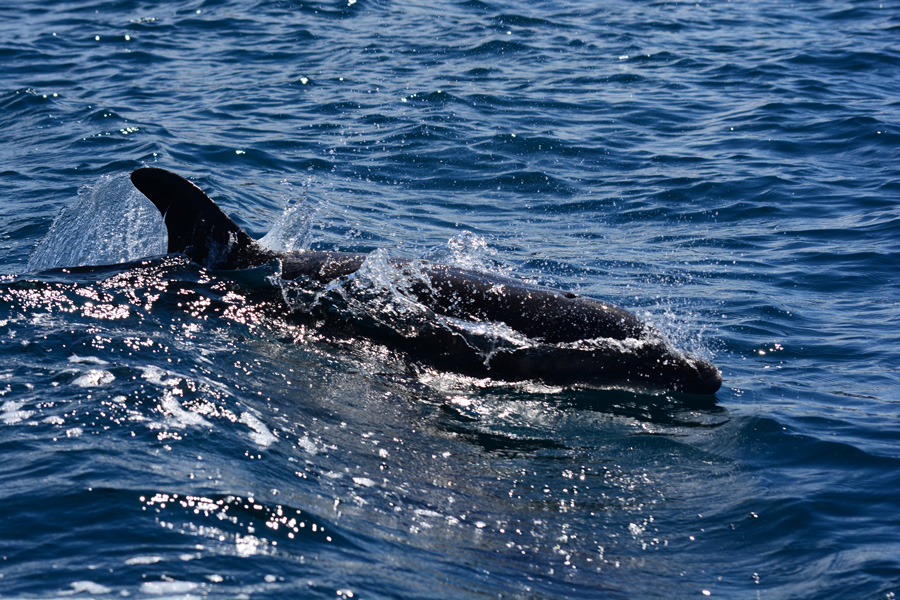 Doing research and then selecting a trustworthy tour operator (props again to ROW Adventures) remained the best option.  For example, their one-day whale watching trip garnered a massive blue within 20 minutes’ boat ride of the marina, a pod of over 150 dolphins and a raucous sea lion colony on a nearby island – along with lunch on a white-sand beach under a palm-thatched wooden shelter.

Loreto’s reputation for relaxed living, reasonable prices and low crime has netted a growing expat population including those living out of converted vehicles.  On the last day in town, a dull grey Sprinter Van opened its side doors to reveal a homemade camper equipped with salvaged cabinets.  “Two weeks and three grand made it what you see. And parts for this old model can still be had down here in Baja,” the weather-beaten owner remarked.  His smile, like the smell of flowers blooming all around, was intoxicating.

Truth be told, flyers posted around town for a good, used Peterson sailboat moored in the Loreto marina got me grinning – and thinking really hard.